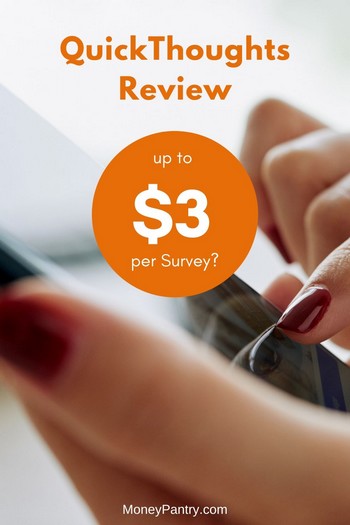 With so many ways to make money online nowadays, it’s pretty hard to decide which side hustle apps are worth your time, and which ones you should give a miss.

One app you might have heard about is QuickThoughts.

In today’s QuickThoughts review, I’ll cover how it works, whether it’s legit, and whether or not it’s a worthwhile app for making money.

QuickThoughts is a survey app (like these apps). So it pairs you with surveys and pays you for completing them. It’s pretty simple really!

Here’s a more in-depth look at how QuickThoughts works:

Okay, so you make money with QuickThoughts with surveys and local mission-based activities. So you can make money online or in-person.

That makes it a little different to some of the other similar apps out there, like Zap Surveys (review here) for example.

Types of surveys and missions available

Here are a few examples of the surveys and missions QuickThoughts has to offer:

So it offers a huge range of different survey types.

This is pretty awesome, I think!

How to find surveys to complete

Finding surveys with QuickThoughts is easy.

Just click on the “Find me a Survey” button in the app. You’ll then get access to all of the surveys the app thinks you’ll qualify for based on the information you provided when you signed up.

If you can’t see any surveys available at the time, try back later.

You can complete up to 5 surveys per day.

For each survey you complete, you earn money. Paid surveys can earn you up to $3 per survey. But how much you earn per survey depends on the length, difficulty, and subject of the survey.

When you complete a survey, your reward will be added to your account balance immediately.

When you have earned $10, you can withdraw your earnings!

This is a pretty low payment threshold, which is great.

Now, you can redeem your money to an Amazon.com gift card.

This is the only redemption option available. So if you’re looking for PayPal cash or gift cards for other retailers, you won’t find it here.

Since Amazon sells so many different products though and millions of us shop on there regularly, Amazon gift cards are pretty handy to have!

When you redeem your money, the Amazon gift code will be emailed to you.

Rewards don’t expire, which is great. And there is no maximum number of gift codes you can redeem.

Now you know how it works, you’re probably wondering is QuickThoughts legit?

Let’s take a look at what other users have to say and how they rate QuickThoughts on the Google Play store, the App Store, and Trustpilot.

On Google Play, QuickThoughts has more than 100,000 reviews and a 4-star rating.

Reviewers on there talked about how easy it was to make money with the app, saying:

You can read reviews of QuickThoughts on the Google Play Store here.

On Trustpliot, QuickThoughts wasn’t as well reviewed. It had 2.6 stars, which is a rating of Poor. It’s worth noting though that there were only 18 reviews on there, so it’s not exactly a wide demographic.

You can read the reviews of QuickThoughts on Trustpilot here.

On the iOS store, the site has 3.6 stars – so almost 4-stars. That’s a pretty good rating.

You can view the QuickThoughts reviews on the App Store here.

Is QuickThoughts for You?

Of course, there are some people complaining about having their accounts closed, but most users seemed to have a great experience with the app.

I would highly recommend joining QuickThoughts, its reviews on the Google Play store are great. The app seems like it actually does pay out!

And with that $10 withdrawal threshold, it won’t take too long to get your rewards.

Plus, I like that the surveys and missions it offers are so varied! You can take everything from short surveys to secret shopper polls!

So give this one a try.

MoneyCroc is a website that claims you can use it to "win free money in 3 seconds"! But is MoneyCroc legit? Can you actually win free ... - Continue - 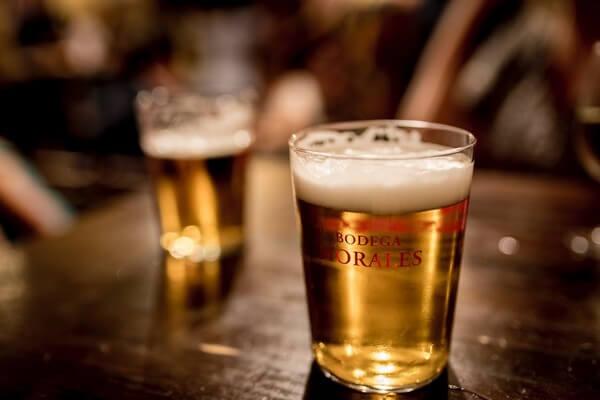 "Is BevRAGE app legit?" While researching for our "Get paid to drink beer" post, I repeatedly came across this question on online forums, reviews ... - Continue -

Want to know the best place to sell your iPhone? Well, you’ve come to the right place. In today’s post, I’ll cover some of the best websites out ... - Continue -