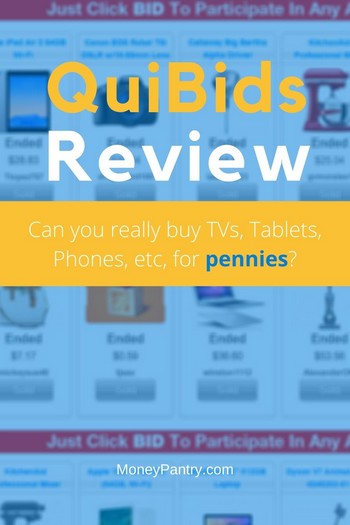 Saving money on the stuff we buy is awesome. One way to get great deals is to use auction sites because they offer stuff at such low prices! Win an auction and you could get a big-ticket item at a ridiculously low price.

The main difference being that with penny auction sites, like QB and DealDash (DealDash review), instead of bidding on individual items, you buy bids and use those as sort of “credit” to pay for stuff.

But is QuiBids legit and is it actually worth your time?

Let’s take a look at how the site works and whether or not you should start using it.

QuiBids is an auction website where you can bid on lots of different items from cameras to purses. It differs from eBay because it’s a penny auction site where you have to pay for bids.

The site is pretty well-established having been launched in 2009.

You can sign up for the site  by going to http://www.quibids.com/.

You can bid on:

According to the company, you can get up to 98% off retail prices.

How Does QuiBids Work?

The site offers discount and overstock auctions where you can bid on items and get stuff at low prices.

Here’s how the site works in a little more detail:

Okay, so once you’ve registered with the site (link above), you’ll need to purchase bids if you actually want to participate in the site’s auctions.

The site offers bid packs, so you can purchase the number of bids that suit you.

Now, your first bid back is a set price. You get 150 bids, which costs you $60. And you have to enter your credit card information for that on sign up, so do be aware. After that, you’ll get five different bid packs to choose from, each a different size. The company recommends that you start with a Beginner Bid Pack so that you can test out the site.

To participate in an auction, simply visit the homepage and you’ll be able to see a section called, “Live Auctions.” 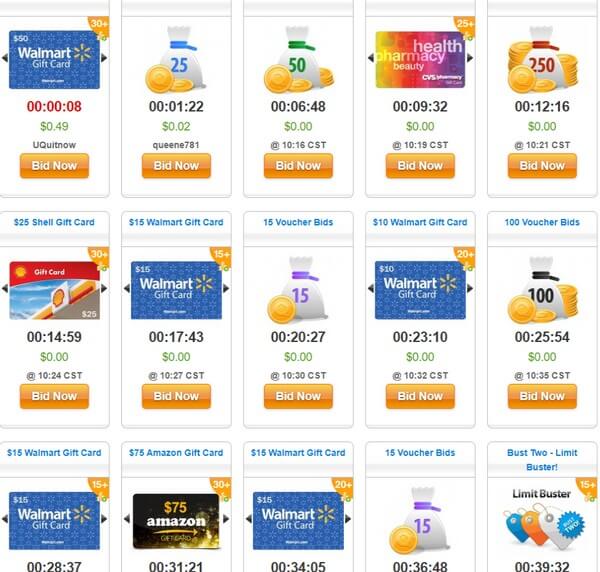 This section displays auctions that are currently running. QuiBids recommends that you watch a few auctions before you start bidding so that you can familiarize yourself with the pace and dynamics of the auctions.

You’ll be able to see bids in the upper-right corner of your screen. This number updates each time you place a bid.

The timer counts down consecutively until it gets below 20 seconds. After that, the timer will reset to 20 seconds every time a bid is placed. This gives other users the chance to bid again.

If the auction continues after a certain number of bids, which is not uniform across auctions, then the timer starts resetting at 15 seconds after each bid.

If the site feels that the auction has gone on too long, the timer will reset to 10 seconds every time a bid is placed. Once the time expires, the auction ends and the last person to bid wins the right to buy the item for the final price.

There are sometimes Speed Auctions hosted on the site where the timer will reset to a maximum of 10 seconds. You can check whether an auction is a Speed Auction, by looking for the little red timer icon.

Now, you can either bid manually or you can use the site’s Bid-O-Matic feature to bid for you. This is basically a feature of the site that allows you to have bids placed automatically.

You can choose how many bids you want to place from between 3 and 150 bids, and the price you want to start bidding at.

What can you bid on? 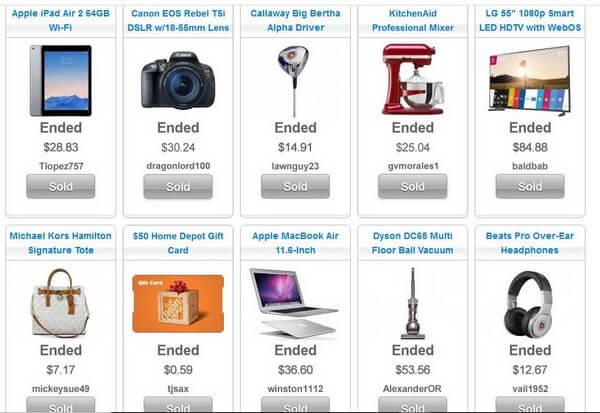 On QuiBids, there are lots of different items you can bid on such as:

There are also voucher bid auctions you can enter to win bids. These voucher bids cannot be used toward the Buy Now option, and they aren’t eligible for a refund either.

If you win the auction, you’ll have to pay the auction’s ending price. You have to pay within 3 days of the auction ending. Once the checkout process is complete, you’ll get emails confirming your purchase and when your shipping status is updated.

Even if you don’t win the auction, you can still buy the item with the Buy Now feature. The site will subtract the cash value of the bids you’ve placed, from the value price of the item and you just have to pay the difference. So it’s sort of like buying the item at retail price.

So for example, if there’s a product worth $20, and you use 30 bids but don’t win, then you subtract the 30 x $0.40, so $12, that you spent on bids and just have to pay $8 more for the product. You can use the Buy Now feature to purchase a product at any time during the auction and up to 2 hours after the auction ends. Simply click the “Buy Now” button on the auction page.

Items are always shipped within 48 hours.

Let’s take a look at some pros and cons.

Here are the site’s upsides…

All products are brand new

According to the company, all of the products on the site are brand-new and factory sealed. On sites like eBay, there are a lot of used items, so this is definitely a bonus of QuiBids.

There’s the option to buy the product

Even if you don’t win an auction, you can still purchase the item using the “Buy Now” option. So if you’ve spent money on bids it means you don’t have to lose out completely.

Here are some cons of the site…

You have to pay to bid

One of the biggest downsides to penny auction sites like QB and DealDash is simply the fact that you have to pay to bid.

That’s not great really because it means that, in some cases, you could end up paying more in bids for an item than what it’s actually worth. Let’s say you place 40 bids on an item. That would cost you $16. But the item could be worth just $10, meaning you ended up spending more money than what the product was actually worth!

One of the biggest complaints I saw of the site on places like Sitejabber was that it charged $60 to people’s credit cards. This $60 is for bids. Most people said that if they didn’t want those bids, the site refunded this money if they asked the site’s customer support, but others claimed that they hadn’t received a refund.

When I signed up for the site, after entering my name and email address I was redirected to a page asking me for my credit card details, and it also recommended a beginner bid pack that cost $60. 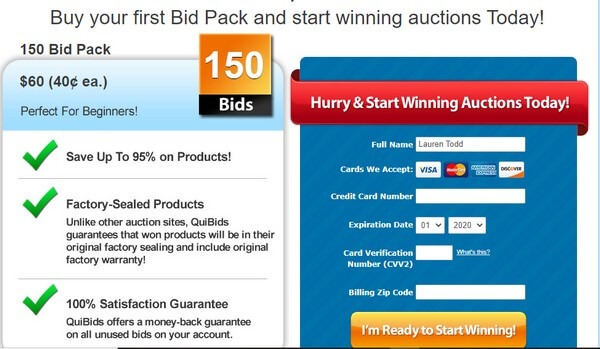 Now, if you want to look around the site before you have to pay anything, you can exit out the page that asks for the credit card payment and then go to the QuiBids homepage again, click on the “Browse” tab, and then the “Live Auctions” link.

But to actually bid on anything you will need to enter your credit card details and pay the $60 for 150 bids.

Poor ratings on BBB and Trustpilot

Despite the company claiming on its homepage that it has an A+ rating from the Better Business Bureau, it, in fact, does not.

QuiBids has an F rating from the BBB.

That’s not a good rating! Maybe it previously had that A+ rating, and it just hasn’t removed that misinformation from the site?

Whatever the case, the site certainly isn’t rated well by the BBB.

Aside from the F rating, it also has 1.3 out of 5 from 6 reviews. That’s not a lot of reviews to give a cohesive opinion on the site, however, it’s not great.

There have also been more than 30 complaints to the BBB about QB.

On Trustpilot, the site only has 2.8 stars, which is an average rating. There were only 10 reviews of QuiBids on there though, so again not enough to give a good consensus.

Some people seem to love QuiBids online. The site has a 3.6 rating from Sitejabber. Most of the positive reviews praise the company’s customer service. Others praise the site for the deals on there and for how fun it is.

On the other hand, it has poor ratings across lots of sites:

Most people complain about getting charged for bids when they sign up, and how difficult auctions are to win.

So is QuiBids a scam?

The site is not just taking money from you for nothing.

You do get bids for your money, but that’s the problem really – QuiBids is a penny auction site.

Penny auction sites automatically come with a problem – you have to pay for bids. So you’re always going to spend money with these sites. And sometimes you spend more than what the item is worth. And this is a problem many people complained about.

One user on Sitejabber says:

While it isn’t an outright scam, it still has its problems. If you’re going to use the site, make sure you set a budget for the number of bids you’re going to buy. For any item that you plan to bid on, you should always do a quick search online on sites like Amazon to see what price that item is selling for on other stores.

You want to make sure you’re getting the best deals.

I hope my QuiBids review has helped you to decide whether or not to sign up for the site! What’s your experience with it? Did you enjoy the site, or did you feel like it was a bit of a rip-off? Share your thoughts on QuiBids with us in the comments below. 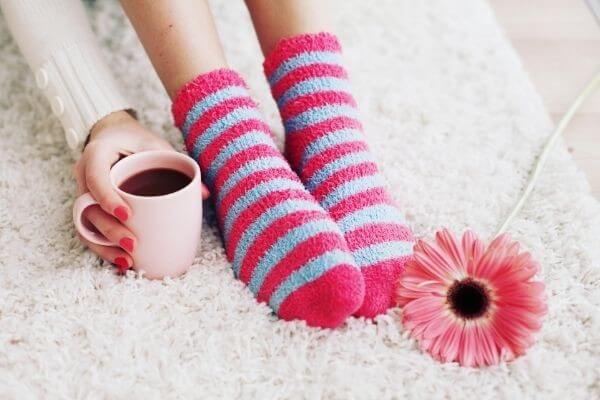 Socks – very few things feel better than putting on a pair of clean warm socks, especially on a cold day. Cozy room for your feet! And since we ... - Continue - 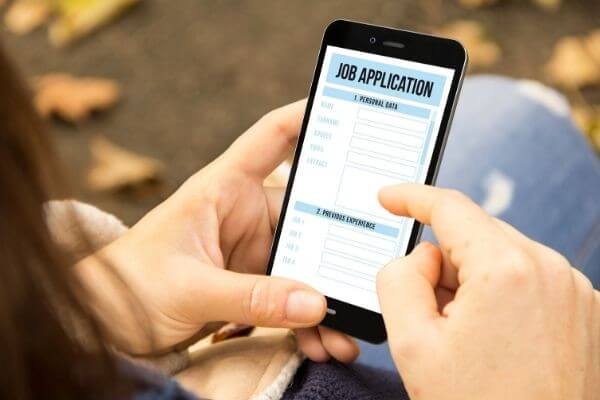 Trying to find a job? In the age of smartphone sand gig economy, making money without a job is much easier, but some of us still like the security ... - Continue -

I've talked about a lot of ways to make money on this site, but we've rarely ever touched on the ages-old bake sale. If you've ever participated in ... - Continue -