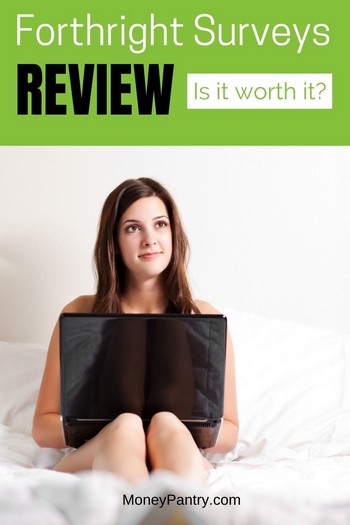 Before we actually get to the Forthright Surveys review, I just want to point out that surveys are often touted as a great way to make money online. And in many ways, they are.

Pretty much anyone can sign up for survey websites and start making money. So regardless of your skills or education, you could earn money taking surveys from home.

The problem is that there are so many survey sites out there that it can be hard to know which ones are actually worth your time and which ones you should give a miss.

One survey site that you may have heard about is Forthright Surveys.

It’s another website that’ll pay you to take surveys right from your phone or computer.

It markets itself, as its name suggests, as a trustworthy and transparent survey site, stating on the homepage of its website that, “Being transparent with you is one of the ways we build trust in our community.”

But is Forthright Surveys legit, or is it just another survey site that’s not worth your time?

Well, in today’s post, I’ll answer those questions and more.

Hopefully, this Forthright Surveys review will help you to decide whether or not the site is for you!

What is Forthright Surveys?

It’s a website where you can get paid to take surveys. Anyone can sign up and make money through the site. It’s owned by Bovitz, Inc.

I’ll start out with how the site works. Basically, there are three steps to making money with Forthright Surveys:

The first step is to register with the site.

This is pretty simple to do:

Now, to join, you will need to enter your email address.

In order to get access to surveys, you’ll need to confirm your email address and make sure that you fill out your profile in the Members area.

Once you’re signed up for the site, you’ll be able to start taking surveys. The site uses the profile you complete to match you to available survey opportunities. Now, the site recommends that you wait three days to receive any new invitations after confirming your email and filling out your profile.

You can participate in as many surveys as you want each day.

You can find a list of surveys that you can participate in if you go to the upper left corner of the Members area.

Okay, so there are two types of survey available with Forthright Surveys:

It’s important to note that surveys are on offered on a first come first serve basis. So, if you get an email about a survey, you’ll want to take it ASAP.

Once you’ve completed a survey, you can cash out your money instantly.

There is no minimum to redeem your earnings and there are no points or anything like that. It’s simple really – you complete a survey, and you get paid!

So, you can choose to withdraw your earnings after just a couple of surveys or you can save your earnings for a larger payout in the future.

Your reward is sent right to the email address that you choose. You’ll get the reward instantly when you redeem it.

What payment options are available?

Okay, so there are no minimums to cash out, but how exactly do you get your rewards?

PayPal payments are great, as are Amazon gift cards.

Tango gift cards are interesting as well, because you can redeem them for digital gift cards to multiple retailers, including:

The gift card you choose will be emailed to you.

How Much Does Forthright Surveys Pay?

The pay varies from survey to survey.

Most surveys though pay between $1 and $5.

So, like with most survey sites, you aren’t going to earn ton of money here. But, if it’s just some beer money or extra cash that you’re looking for, then surveys could be worth your time.

Aside from getting paid for each survey, you also get a bonus after every three surveys with the site’s loyalty credits.

Okay, so now for the answer to that all important question – is Forthright Surveys legit?

Or is it just a scam site?

Well, aside from giving my own opinion on the sites that I review, I also like to look at what other people have to say about their experience with a particular site. You see, with survey sites, some people have great success and others don’t. But, from the reviews, I like to see what the majority of people are saying.

I like to check for a BBB profile or Trustpilot profile to see what the common consensus on a site is.

Here’s what I found:

The company only had 5 reviews on there. So not a particularly wide demographic or enough of a demographic to give a clear consensus about Forthright Surveys.

Forthright Surveys had 2.8 stars out of five, which is a rating of “Average.”

Most users complained of not having many surveys available that they actually qualified for with one user saying:

You can view the company’s full Trustpilot profile here.

Those figures aren’t referring to Forthright Surveys specifically though, but, rather the company that owns the site. However, it at least gives you some indication of what the parent company is like.

You can view the BBB profile for Bovitz, Inc. here.

Okay, so there were quite a few postings about Forthright Surveys on Reddit where it had mixed reviews really. Some people said they liked the site, especially in posts from two or so years ago.

However, in more recent posts, there are more negative opinions of the site.

Most users complained that since the site introduced the partner surveys, they haven’t been able to qualify for as many surveys. And others said that they are sent from survey to survey without getting paid.

Other users praise the site with one on this Reddit thread, saying:

Is Forthright Surveys Worth It?

Okay, so is the site actually worth it? Let’s take a look at some pros and cons to help you decide.

Let’s start out with the site’s good points:

The website allows you to take as many surveys as you want each day. This is great because it means that there’s no limit on the earning potential here.

You can withdraw your earnings anytime

I really hate it when sites have a really high withdrawal limit. I mean, even getting to $20 before you can cash out can be tough with surveys since most of the time you only earn a few cents or bucks for each survey.

And, some sites have withdrawal limits that are even higher than that – like $30 or $50 in some cases.

With Forthright Surveys though, that’s not the case.

You can withdraw your earnings at any time. There is no withdrawal limit.

Another really great thing about the site is the number of payment options that it offers.

You can cash out your earnings to PayPal. I always like when sites offer PayPal payments because as good as gift cards are, actual money you can use anywhere is always a good thing.

And, if you do want to get some free gift cards, it’s good to know that those are available too.

You can withdraw your earnings to a gift card if you want to.  You can get gift cards for Amazon, which is always handy. Since there’s a Tango gift card available as well, it means that you can get tons of different digital gift cards, like:

Get bonuses for the site’s own surveys

Let’s look at some of the downsides to the site:

There aren’t enough surveys from the site itself

Many people complain that most surveys are partner surveys, which are those third-party surveys that I mentioned above. And, these don’t give you that loyalty bonus, and there’s also the issue of being screened out of surveys, which brings me to my next point…

People are often disqualified from surveys

The biggest downside and the one that I saw most users complaining about is that they were screened out of surveys.

Now, this is the complaint that’s most common with survey sites in general.

You see, companies want to make sure that they are targeting the right demographic for their surveys.

If a company is looking for moms aged between 40 and 50 years old for example, it’s going to want to make sure that this is who’s actually participating in its surveys.

So, this means that you will need to answer some questions just to qualify for a survey. And, you won’t qualify for every survey you try out. This means that you could waste anywhere from five minutes to 30 minutes or even more than that answering questions and you might not even end up qualifying for that survey. Aside from wasting your time, you usually won’t get paid either.

Like I said, you’ll find this issue on lots of survey sites. And, Forthright Surveys is no different.

For its partner surveys, you don’t get paid if you’re screened out of a survey.

However, as I mentioned above, you do receive compensation for the site’s own surveys, even if you don’t qualify for them. But, you have to try 3 surveys before you qualify for the bonus.

As I briefly mentioned above, surveys on the site are given out on a first come first serve basis. So, this means that they run out fast!

Lots of people complain about getting a “Quota Full” message even when they are halfway through taking a survey. This can be a little frustrating. It’s best to take surveys as soon as you can.

However, people seem to find it hard to actually qualify for many of the site’s partner surveys.

So. it’s probably not going to make you a ton of money. I think there are more profitable sites out there that you could use, like Survey Junkie (review), Swagbucks, Univox, and Qmee.

Both sites offer surveys and a variety of rewards like PayPal payments and gift cards. Qmee (review) pays instantly and Swagbucks (review) allows you to withdraw your earnings for a little as $1 to $5 depending on the reward type you choose.

What I also like about Qmee and Swagbucks over Forthright Surveys is that both allow you to make money doing other tasks as well as surveys.

So, even if you don’t qualify for many of the surveys on there, you have other money-making options to try.

You may want to try out Forthright Surveys if you’re looking for another site to add to your list of money-making methods, but by itself, it’s unlikely to make you much cash. Qmee and Swagbucks are better options.

If you do use Forthright Surveys, then I would recommend skipping those partner surveys as that’s what most of the site’s users had complaints about.

What’s your review of Forthright Surveys? Do you recommend the site, or would you caution against it? Let us know your opinion on the site in the comments section below.

Saving money is great, but getting stuff for free is even better, right? If you’ve been looking at ways to get free cash, gift cards, and products, ... - Continue - 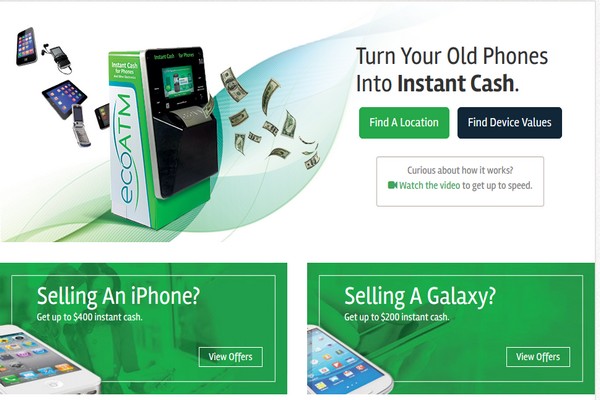 Every household has one thing in common... A box/container full of old and broken electronics! We all have a box full of unused electronics - ... - Continue - 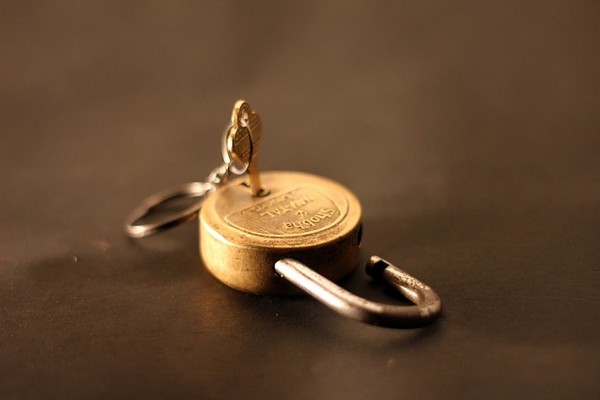 Some people work their hands to the bone just to survive, and some people kick their feet up and live in luxury. It seems really strange, but we're ... - Continue -