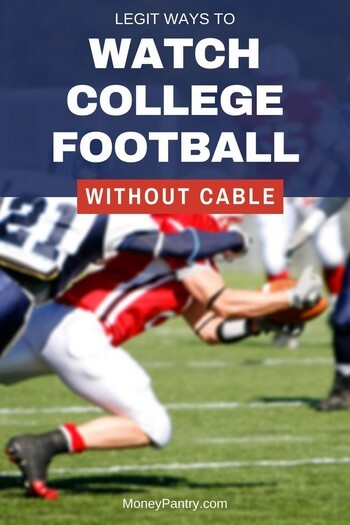 A lot of spots fans would love to watch college football without cable.

Cable is expensive and not always worth it!

Recently, it was revealed that more than 80 million U.S. households have been paying about $20 per month for sports networks that haven’t been airing live sports.

According to a report from DecisionData.org, the average cable bill now exceeds all other household utility bills combined! The average household cable package costs around $217 a month!

That’s why many of us are ditching cable altogether.

When you cut the cord, one of the first things you may wonder is how to watch college football without cable for free.

That’s a good question because if you, like millions of others, have decided not to get a cable subscription, you might wonder where you’ll be able to get access to games.

Well, we’ve got you covered.

How to Watch College Football Without Cable

In today’s post, I’ll give you simple ways to watch college football games without paying for a cable subscription.

1. Get an HD antenna: Watch College Football Without Cable for Free

Really the only way to watch college football for free without cable is to use a digital HD antenna.

These aren’t like those old-school rabbit ear antennas that don’t have a great signal. They’re pretty good for getting games. Many stations like ABC, CBS, NBC, and FOX air college football games.

So, this is a good option. However, with an antenna you can only watch what your local channels are broadcasting which is really a great way to save money since you can watch local TV without cable. That’s why you might want to try this next method instead…

Sign up for a Streaming Service with Free Trials

Like I said above, the only way to watch college football without cable for free is to use an HD antenna so that you can pick up games.

However, you’ll only get access to the ones that are being broadcast. Since many games are aired on places like ESPN, it means you can miss out.

Also, another benefit to streaming services is that you can watch games on multiple devices. Many of them offer an app so you can watch from your phone too!

Now, these services are not free, but many of them do provide a free trial period. So, you can get college games for free, at least for a short period.

Once the free trial period is finished, you will have to pay a monthly subscription fee.

However, this is, for most services, much cheaper than the cost of a cable TV subscription.

I would recommend signing up for free trials of these subscription services:

You can get some NCAA football games for free with a subscription to Sling TV.

Sling TV is a streaming service with a lot to offer.

Here’s why you should consider the service:

Another place that you can watch college sports, including football games, is with FuboTV. Like Sling TV, this is a streaming service that’s offering a multitude of channels.

Formerly known as CBS All Access, Paramount Plus is a streaming service that offers sports, movies, and more. With it, you’d get the content you used to get with CBS All Access, which includes college football.

If you sign up for Hulu + Live TV, you can get access to lots of channels that broadcast college football games!

Here’s why you may want to consider Hulu + Live TV:

Also don’t forget to check out our post on how to get Hulu for free!

Other Streaming Services to Try

Okay, so above, I’ve given you quite a few ways to watch college football for free without cable.

In this section, I just want to cover a few more streaming services that you might want to consider. I’ve included these in a separate section because they don’t offer a free trial. So, they don’t give you a free way to watch NCAA games. That being said, they are much cheaper than a cable subscription.

Consider these services if you’re looking for some more options for watching college football:

Another option to consider if you want to get lots of college games is ESPN+. It doesn’t offer a free trial, but it’s far cheaper than cable, and you can watch tons of games with it.

Here’s why you should consider ESPN+:

One option to consider is AT&T TV. It’s another streaming platform offering lots of sports. It’s not free and there’s no free trial available, but it can work out cheaper than a cable TV subscription.

Here’s why you should consider the platform:

Next on the list we have TVision. It’s an online television service from T-Mobile. Now, this service is only available to T-Mobile and legacy Sprint postpaid customers with up to 12 wireless voice lines.

TVision has a few different packages available, and with the LIVE TV+ package, you get access to lots of channels that carry college football games.

Here’s why you might want to consider TVision LIVE TV+:

I think that cable is overpriced, so I totally get why so many people are choosing to cut the cord.

If you just want to pick up a few games, getting an HD antenna is definitely your best option.

If you’d like to stay up to date though, consider one of the streaming platforms mentioned above. It’s great that most of them offer free trials., and many of them, like Sling TV, and FuboTV work out way cheaper than a cable subscription!

Have any tips on how to watch college football without a cable subscription? If so, share them with us in the comments section below. 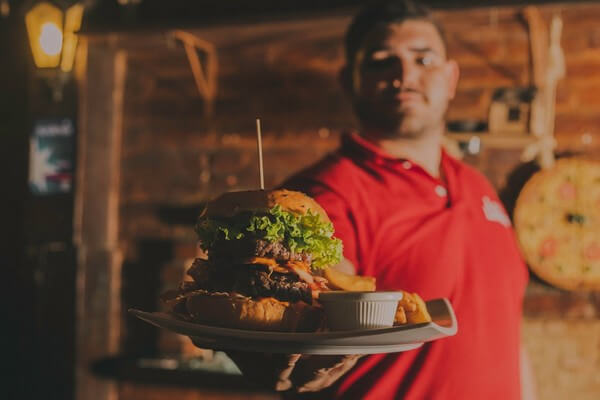 Getting free food on your birthday isn't the only way restaurants rewards their guests. Many of the major restaurants and eateries offer customer ... - Continue -

Learning how to make money with a drone wasn't on anybody's radar (pun intended) just a few years ago. But today, according to the Federal Aviation ... - Continue -

Are you a retired teacher looking for the best jobs to make money? Or perhaps you are about to retire and are looking for work you can do after ... - Continue -