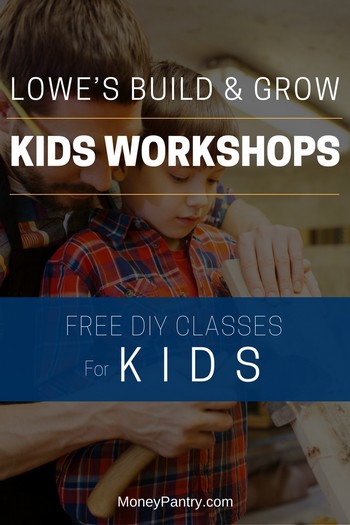 Lowe’s Build and Grow was a program for kids.

It was another way for frugal parents to save money at Lowe’s by having their kids learn how to build things through the free workshop classes.

At the Build and Grow class, kids could work on a fun, hands-on craft project, which involved them building something like a wooden boat, for example.

Each workshop was about an hour-long and was led by Lowe’s staff.

The program offered kids a great way to learn and harness their creative skills.

What was also great about the workshops is that they were entirely free.

Why did Lowe’s Stop Build and Grow?

If you used to take your kids to the Build and Grow workshops at Lowe’s, or want to start attending these workshops, then you’ll be disappointed to know that the store doesn’t run them anymore.

The last class was held in December 2016.

So, if you’re looking for the Lowe’s Build and Grow 2017 schedule, and are wondering why you can’t find it, that’s why.

It’s not really clear why the store stopped offering these workshops.

Although Lowe’s Build and Grow is canceled, it doesn’t mean that your child still can’t enjoy working on creative, hands-on craft projects.

Here are a few options to consider:

Lowe’s might not offer in-store classes anymore, but it still provides some really useful tutorials and informative articles.

And, it even offers some video tutorials too.

You can use these videos and articles to build items and work on craft projects with your child.

Here are two places you should take a look at:

We highly recommend checking out the Lowe’s How-to library.

It includes articles that tell you how to make a variety of items.

The craft section of the library is particularly great because it offers tons of tutorials for projects that you and your child could do together.

A few examples of tutorials that kids would love too include:

Aside from offering tutorials in articles, Lowe’s also has a YouTube channel, full of how-to videos.

The majority of the videos are aimed at adults though. But, there are a few videos for projects that kids could help with.

Here are a couple of examples:

Sure, working on craft projects from online tutorials can be fun. But, it’s not really the same as going to a class.

While Build and Grow Workshops from Lowe’s might not be available anymore, it doesn’t mean that your child has to miss out.

Home Depot actually offers its own workshops for kids known as the Home Depot Kids Workshop.

And, they are very similar to the ones that used to be offered at Lowe’s!

These Home Depot workshops allow your child to work on a hands-on build project.

Classes at the Home Depot usually involve building something like a truck, race car or picture frame.

What’s great is that your child not only gets to keep the item that they’ve built but they also get a certificate of achievement.

Plus, they get their own apron and a commemorative pin.

This may not exactly be an alternative to the free kids classes, but it offers a great way for kids to DIY stuff.

You can buy a variety of kits that come with step by step instruction on how to build whatever the kit shows.

These kits are normally very cheap. Most are under $10.

The Lowe’s Build and Grow program was a great workshop for kids.

At the classes, kids could have fun and be creative, all while improving their craft skills.

And, it was free!

It was a great activity to keep the kids entertained at the weekend.

So, the fact that the program isn’t available anymore is a little disappointing.

But, Home Depot offers a really great alternative with its workshops.

The workshops are essentially the same as the Build and Grow program. Your child gets to build something in a class setting.

Overall, if you’re interested in the Build and Grow program by Lowe’s, then you should definitely go with the Home Depot Workshops instead.

If you are looking for part-time work from home jobs, then this is the post for you. There are many companies that offer part time jobs from ... - Continue -

Eating out can be expensive, as can a trip to the grocery store. That’s why you might be thinking of taking surveys for free food. Sure, there are ... - Continue -

There are 4,743 Walmart stores throughout the United States, with many of us choosing to shop there thanks to its low prices, and also the variety of ... - Continue -