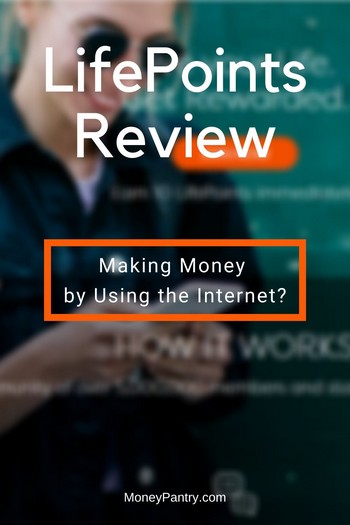 Is LifePoints a legit survey panel where you can get paid for answering surveys?

Read this LifePoints review to find out!

Up until 2019, MySurvey and GlobalTestMarket were popular survey sites.

We’ve mentioned MySurvey a lot on Money Pantry – we even did a full review of this survey site.

But, it’s no longer around.

Well, it’s a survey site, much like Swagbucks and Survey Junkie. where you make money taking surveys.

Basically, it still allows you to make money just as you could with MySurvey.

Now, LifePoints is still operated by the same company, Lightspeed Research Limited. This means that there’s no change in ownership.

There is a new site and a new name though, so what exactly does LP have to offer?

Is it a legit survey site?

And can you make money from it?

Well, below, I answer those questions and more.

I offer a full LifePoints review that tells you everything you need to know the site.

Signing up for LifePoints

Signing up for LP is totally free to do. Visit the website here to get started.

So, there’s no fee like some of those scam survey sites will try to charge you.

Click the “Join Now” button on the home page, and follow all the initial steps to register.

Once you’ve done that, you get an activation email to confirm your membership.

Just click on the link, and your membership will be activated.

The company has also added an app for both Android and iOS devices available on Google Play and the App Store. Needless to say, it’s free to download and use.

As a member of the site, you help the world’s largest companies and brands by participating in surveys.

Basically, these big companies need input from consumers like you in order to improve their products and services and develop new ones that customers will love.

In return for your feedback, you’ll collect LifePoints that you can redeem for rewards.

You don’t need any special skills to make money with the site – all you need to do is share your thoughts and fill out online surveys.

Here’s how it works in a little more detail.

You make money with LP by taking surveys.

Survey invitations are sent out by email, and they can be taken any time during the survey period.

You can take surveys when you want to by logging in to your LP account, and clicking on the “Start Now” button.

So, that’s pretty handy that you can just login to your dashboard, see if there are any available surveys and take surveys whenever you want to.

How many survey invites you get each month depends on what types of surveys are being conducted and how well-suited you are to each survey.

LP offers surveys on a range of topics, like health, sport and travel.

Although the length of surveys varies, it takes 10 to 20 minutes on average to complete a survey.

You are not required to participate in each survey, meaning you can pick one up when you want to, and pass on the surveys that don’t interest you.

Occasionally, diaries will be sent out where you have to record specific behavior or habits for the period of time that’s asked. In some cases, products are mailed to you to test out, and then you’ll be prompted with questions about the product.

So, surveys are pretty varied.

You’ll earn points for taking surveys. The number of points you get will depend on a couple of factors:

Each invitation will tell you how many points you’ll get for participating and completing the survey.

While the main way to make money with LP is by completing surveys, you can also get points for other activities, like mini-polls, product testing, and other types of data collection.

Redeeming your points for rewards

Once you’ve earned your points, you’ll be able to redeem them for rewards.

You can get PayPal vouchers.

You can also get e-gift certificates from places like:

You can also donate your points to charity if you want to.

There are lots of different reward options available, which you can view by clicking “Rewards” at the top of the page when you’re logged in to your member dashboard.

How Much Money Can You Make?

Also, how many surveys are available to you and how many you complete will also affect how much money you make.

The more surveys you take, the more points you’ll get.

On Trustpilot, one of the site’s user says they’ve used the site for over 6 months, and have received $200 in gift cards.

So, that’s just over $30 a month for just a couple of surveys each week.

You could easily make more money than that if you completed more surveys.

Now you know how the site works and what rewards you can get, you’re probably wondering whether LifePoints is legit and how other users rate it.

There are so many survey sites out there, and many of them are, unfortunately, scams.

That’s why you do have to be careful with survey sites.

Is LP a good site that people actually enjoy using and make money from?

Below, I’m going to cover customer reviews of LP from various sites, like Trustpilot and the Better Business Bureau.

LifePoints has more than 4,400 reviews on Truspilot, with a pretty impressive Excellent, 4.5 star rating on the site.

Customers spoke highly of the site. Here’s what they had to say:

Most of the reviews of the company were positive.

LifePoints is owned by Lightspeed LLC, as I mentioned above.

This company is listed on the Better Business Bureau website.

It has a B rating, which is pretty good.

But, then things turn a little sour when it comes to customer reviews, and complaints from the site’s users on there too.

Most of the complaints and reviews discuss the following issues:

One of the site’s users says:

Even though the company responded to the BBB’s inquiry, the BBB says it, “Didn’t find the response sufficient to address an underlying cause of the complaints.”

Next up is Reddit. I did find that the discussions of LP on Reddit were pretty negative.

One Redditor echoes what many of the customers who complained about LP to the BBB were saying about the customer support being poor.

They worked with the site when it was known as Global Test Market. This Redditor says that it took literally years for the LifePoints customer support team to get back to them:

Of course, that’s not too great!

Is LifePoints Worth It?

The BBB and Reddit would indicate that customers don’t have the best experience with LP.

When they try to contact customer support, they get no response.

But then you look at the company on Trustpilot and see that it’s actually incredibly well reviewed.

The rating on there is Excellent, which tells you that this is a survey site that’s actually worth trying.

Also, it’s not one of those scam sites that makes you pay to join.

I’d add it to your list because the thing with survey sites is that the more of them you are part of, the more surveys you have on offer.

When you have more surveys to take, you earn more money.

You might be one of those people who has a great experience.

Because Lightspeed LLC has changed its survey sites recently and became LP, it may have improved some of those negatives that were mentioned on the BBB.

After all, Lightspeed LLC has been in business for almost two decades, so some of those issues mentioned in customer complaints may no longer be a problem.

Of course, there is the chance that you may experience the problems customers mentioned to the BBB.

Just try out a few surveys and if you don’t get paid, then do get in touch with customer support.

With any money-making venture online, you need to proceed with caution – don’t put in too much of your time before you get paid.

LifePoints FAQ: What You Need to Know

Here are a few more things you need to know about LP.

How old do you have to be to join LifePoints?

You must be 14 years or older to join the site.

Yes, your points expire three years from the date you earned them, or sooner, after twelve months of no activity.

Yes, LP is one of those survey sites that pay via PayPal as well. Once you have enough points, you’ll be able to choose PayPal as your redemption option.

Why didn’t I get points for a survey?

Shortly after you complete a survey, you’re credited with the points stated in the survey invitation.

You can contact the company’s support team if you weren’t awarded the right amount of points.

You’ll need to provide the survey number when you contact LP for assistance.

According to the site, for some surveys, including diaries, forums, discussion boards, and webcams, it doesn’t credit your points until the entire survey is closed.

In these cases, if you have completed a survey, you should get your points added to your membership within six to eight weeks of participation.

If you still haven’t received your points after this time, then you’ll need to get in touch with LP for assistance.

How long does it take to get money to your PayPal account?

Funds are deposited to your PayPal account within ten business days.

This will ensure that you get the funds delivered to your PayPal account.

How long does it take to get an online voucher?

The site says to allow up to ten business days to receive your online voucher.

What does LifePoints do with your information?

The data collected from surveys, so the survey results are stored in a database that can be analyzed by the company’s clients. However, LP says that personal data will never be revealed, sold or traded.

Surveys are great because they give you such an easy way to make money. Really anyone can make money from surveys.

That being said, you won’t always qualify for the surveys offered by a site, which is why I always recommend signing up to multiple survey sites.

That way, if there’s a not a survey you qualify for on one site that week, you can find ones on the other sites you’re signed up to.

I would add LifePoints to that collection of survey sites.

While it does have complaints with the BBB, it still has a B rating.

There are more than 4,000 reviews of the site on there, and it has an Excellent rating.

That means that many people are making money with the site.

Give it a try, and let us know about your experiences with the site in the comments section below. 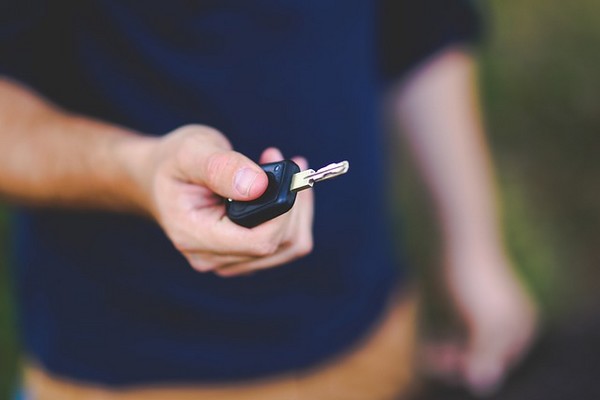 Here is a scenario that plays out for many people. You get to work and park your car until it's time to go home in 8 hours or so. Within that 8 hours ... - Continue - 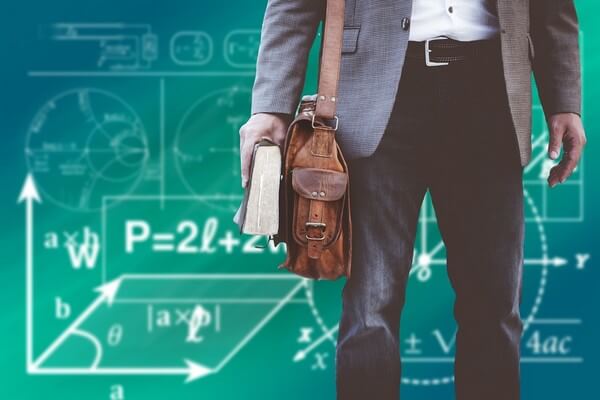 Teachers deserve discounts. On average, educators are spending more than $500 out of their own pockets annually on supplies. Fortunately, ... - Continue -