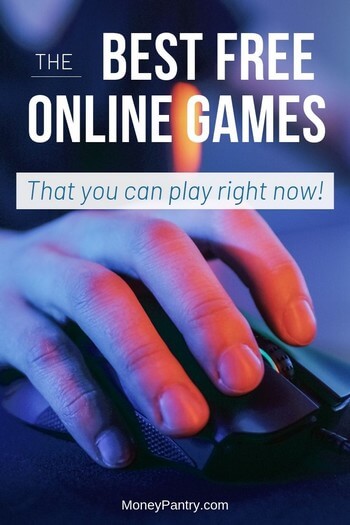 Gaming can be an expensive hobby when you take into consideration the cost of a console and computer, mico-transactions, and video games themselves.

Although there are ways to get free video games. But that’s limited to a small number of games and you usually can’t get the popular ones for free anyway.

Fortunately, there are a lot of browser-based games that you can play without downloading or paying a dime.

We’ve compiled a list of the best free online games you can start playing today. Some of them are well known and some of them you may have never heard of, but we’ve made sure that all of them have a majority of positive reviews.

By the way, if you’re looking to make some money from your gaming skills and passion, check out our list of sites that pay you to play games online.

This is a strategy game focused on player versus player combat. There are over one hundred characters you can play as. With a player base of over one million people, you won’t have to worry about finding people to play with.

Heroes & Generals is a free-to-play MMO and first-person shooter where Germany, the United States, and the Soviet Union fight for victory in World War 2. There are many classes you can play, such as:

If you play video games, you probably have heard of this one. It is one of the most popular online action games of all time. It gets free updates often, including new game modes, maps, equipment, and character cosmetics.

In this MMO game, you can create your own hero or villain who will fight alongside and against characters in the DC Universe.

Path of Exile is an online role-playing game set in the dark fantasy world of Wraeclast. It has a strong online economy, character customization, and competitive PvP. The game is completely free and will never be “pay to win”.

If you were a fan Digimon, you might like this MMO that is set entirely in the Digimon universe. This game is geared more towards kids and has a very family-friendly atmosphere.

This is known as the ultimate fishing simulator because of the in-depth length it goes to preserve the skill of fishing. Enjoy beautiful scenery, catch hundreds of fish, and hang out with other people as they relax and enjoy the sport.

Everyone has heard of Fortnite. It’s the biggest battle royale type game currently, with no signs of slowing down.

Gems of War is a Puzzle and role-playing game hybrid from the creators of Puzzle Quest. Instead of combat, you complete puzzles by matching similar jewel colors together. It’s a very casual game that you can pick up or quit at any time.

This is a popular team-based game you can play online. You can download the full game and play for free. There is no pay-to-win, but you can choose to buy new characters to play if you wish.

In this game, you can take control of a powerful fleet and take part in a war in space. The gameplay is very strategic and you’ll have to think about each move you make carefully.

This game is similar to League of Legends in that it is also team-based. There are many different game modes and characters you can play as. The game has a unique mythology theme to it, allowing you to play as Zeus, Hera, and Hercules.

This is a side-scrolling roleplaying game that happens to be one of the biggest MMOs of all time. It’s also family-friendly!

This is a colorful game that lets you play as tons of unique characters. You can set your own powers from dozens of cards to customize your abilities too.

15. Lord of the Rings Online

In this game, you can explore an epic story, craft items, decorate and furnish a house, and much more.

This game features over 200 ships, dating back to World War I and World War II. Amass a giant navy by yourself or with your friends, then set out to fight other players!

Similar to MapleStory, this sequel is a massive MMO with upgraded graphics similar to a more polished version of Minecraft.

This battle-focused game lets you battle other players with your choice of over 40 Legends to choose from. There are tons of in-game events for you to enjoy and the game itself is actually pretty family-friendly.

This is a cooperative Action Tower Defense game packed with roleplaying elements like loot, leveling, and pets.

EVE Online is an MMO that takes place in space. Players can play for free, choose their own path, experience space exploration, immense PvP and PvE battles. There is also an ever-expanding sandbox world for you to explore.

This pretty game is a family-friendly MMO with a diverse world for you to explore. There are premium purchases you can make for cosmetics and more but you can still play for free.

Closers is an episodic anime-style role-playing game. It features a huge storyline that unfolds over several seasons set in the city of New Seoul. Play with a unique cast of characters and enjoy classic arcade-style gameplay with a modern twist.

Digital Combat Simulator is a free-to-play digital battlefield game. You can control dozens of aircraft and vehicles, plus purchase others if you wish.

This is a unique basketball game that lets you play with people online. It’s actually quite high quality, with a nice art direction, decent graphics, and fluid animations.

KurtzPel is a 2 vs 2 co-op player vs player action game. You can use online matchmaking to fight to other players or fight against giant bosses to hone your skills.

This is an epic fantasy adventure where you can fight hundreds of invaders, raid dungeons, and more. This one is definitely geared for adults, so maybe don’t let your kids play it.

This Mad Max style game lets you craft hundreds of unique vehicles, which you can use to battle other players and find parts to craft weapons and other vehicles in your own personal workshop.

This kid-friendly game features a cute cartoony art-style, Player vs Player game modes, character dress up, and a fun storyline. You can also explore dungeons and get cool loot for your character.

This game is obviously all about wizards! Check out amazing spells, embark on a wizard school adventure, and duel others. This is a kid-friendly game that is dedicated to being always free and always family-friendly.

Do you like watching giant robots fight? If you are a fan of Transformers, then you’ll probably love this game. You have a giant mech that you can use to fight other mechs!

Are you a fan of Yugioh? You’ll love this game. You get to play against players from anywhere in the world with super fun decks of cards.

This is another Star Trek game. In this one, you get to command a ship through space. The decisions you make will determine if your crew live or die, make enemies or allies, and much more.

This game is all about tanks. Control giant war machines and wage a battle against people all over the world in tournaments and realistic maps.

Unlike most MMOs, Albion sets out to make the entire world player-driven. Want to fight enemies who want to destroy society? You can do that. Want to retire from the warrior lifestyle and settle down with a farm? You can do that. They even have real estate you can buy and live in.

This player vs player game lets you go up against other people with tons of champions who have unique powers.

This is a family-friendly game that lets people collect minions and spells to use to fight other players. It’s a fast-paced game you can play over and over again.

Dungeons and Dragons has gone from pen and paper to desktop with this unique fantasy MMO. This is a more adult-oriented game, so we wouldn’t recommend it for kids.

This is an award-winning, officially-licensed Dungeons & Dragons free-to-play MMO role-playing game. It’s constantly being updated with new content too!

This is more than just a war game. Black Squad has a unique storyline that goes beyond a standard war story. In the game, you can fight against enemies of the CIA or join a network of criminals.

This is a medieval-themed game, you can build an army and raid villages, fight other players, and more. It’s rated 16+ so it’s probably not good for kids.

If you aren’t interested in combat games, you may love this one. Kids and adults can both enjoy the fun puzzles thrown at them with a whole cast of Marvel superheroes.

Trove is a colorful MMO game in the style of Minecraft. Explore fun worlds, fight unique monsters, and craft cool items in this grand-scale adventure.

With 16 characters and over 60 classes, this game can support a lot of play styles. It’s a fairly simple game with pixelated graphics, so you don’t have to worry about it taking a toll on your PC.

This game is an MMO with nice graphics, fast-paced combat, a unique world, and customizable characters. We wouldn’t recommend it to kids, but adult players will enjoy this one.

Call to Arms has realistic war vehicles, heavy weaponry, and dozens of customizations you can make to your arsenal. If you want a strategic war game that is focused on being realistic, you might enjoy this!

This is an online card game in which you collect cards to build a deck that can fight other players. It features over 1,000 cards with gorgeous art for each one.

In this game, you are part of a team that aims to take out an opposing team. It’s quite popular and features tons of maps, weapons, and customizations.

This is currently one of the biggest multiplayer games out there right now. Warframe features dozens of characters you can play as, with unique looks and combat classes. It also allows you to explore space through massive open worlds.

After reading this article, you should have quite a few ideas on which games you’d like to play in the upcoming months. Gaming can be expensive, but it doesn’t have to be! You can get lots of fun out of these best free online games without spending a dime.

Are there are free games you like to play? Let us and our readers know in the comments below!

If you have been looking into making money selling print-on-demand products, then you may have heard about Redbubble. It’s a site like CafePress ... - Continue - 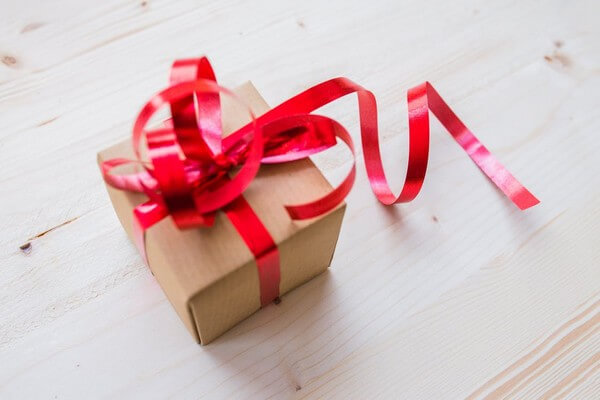 Do you love getting free stuff? Who doesn’t? Whether it’s free beauty sample boxes, baby samples like diapers and formula or food samples for ... - Continue - 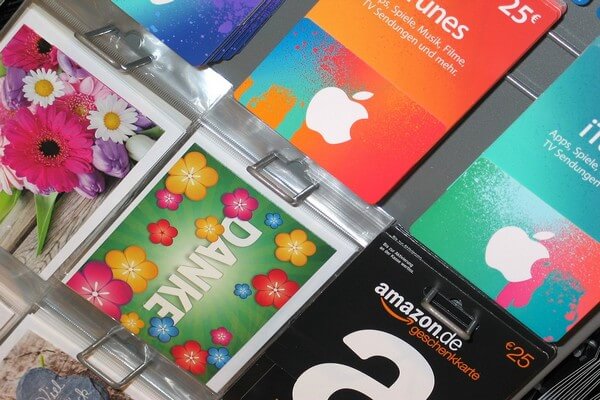 "Where can I sell my gift cards near me and get cash instantly?" You've probably asked that question once or twice. Getting unwanted gift cards ... - Continue -